A Guide to ETS InstaSnakes

An InstaSnake™ is a passive adapter that allows the user to connect balanced-line analog audio using 4-twisted pair premise/data cable, commonly known as Category 5, Category 5e, Category 6 or Category 6A. InstaSnake adapters can carry up to four channels of audio. 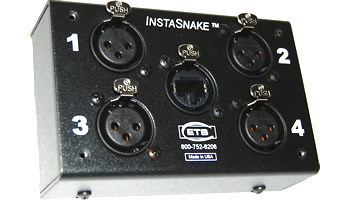 The standard InstaSnake PA202 comes in 11 variations. These adapters have five connectors. Four of the connectors are XLRs for balanced-line audio, the fifth is a Neutrik etherCon which is a data connector. You can order all male or all female or any combination of male and female for the four XLRs. ETS also makes versions with "pigtails" (short cables) instead of box-mounted jacks. This saves buying or assembling short XLR cables that connect a mixer, console or other equipment. The four XLRs connect the four pairs in the data cable. InstaSnakes are passive devices so there is no power supply, chips, or transformers. Therefore, the InstaSnake can perform extremely well at the limits of most test equipment for frequency response, crosstalk, phase, impedance variations and common-mode noise rejection.

Yes. InstaSnakes can carry up to eight channels on the four pairs in data cable, two digital channels per pair.

Yes, InstaSnakes can carry line-level (+4 dBm, +8dBm) or microphone level (-50 dBm, -60 dBm) signals. Because the crosstalk between pairs of audio frequencies is extremely low (>-90 dB), you can mix mic and line-level signals on InstaSnakes.

CAUTION: InstaSnake adapters take advantage of the fact that professional microphone and line-level signals are run as balanced lines. Unbalanced signals should not be used with InstaSnakes without first converting those signals to balanced lines. In the same way, devices that are "poorly balanced" can compromise the performance of an InstaSnake and could generate unwanted crosstalk between signals.

DOES THE DATA CABLE BETWEEN THE UNITS NEED TO BE SHIELDED DATA CABLE (STP, ScTP)?

No. If you are running standard balanced line analog or digital signals, microphone or line level, they will run very well on any Cat 5 (or better) data cable. In fact, a good argument can be made that UTP (unshielded twisted pair) data cable can often work BETTER than shielded data cable. When cables connect two distant pieces of equipment and when this equipment is running at different ground potential, the shield in the cable will then have a significant voltage running on that cable, which is the difference in ground potential between the two devices. This is called a "ground loop" where the shield now becomes a great way to introduce interference into the cable. Using UTP cable can eliminate that problem.

THERE ARE MANY DIFFERENT KINDS OF DATA CABLES AT DIFFERENT PRICES. ARE THEY ALL THE SAME?

Like everything else there are good and bad data cables. Make sure that the cable you buy is made by a reputable manufacturer. As you go up the list of data cables (Cat 5, Cat 5e, Cat6, Cat 6A), the cable performance gets better. This generally would apply to audio applications as well. The ultimate data cables are bonded-pair data cables, where the wires in each pair are attached together. This gives the best data performance ever in a twisted pair and the best audio performance as well.

WHAT ABOUT PHANTOM POWERED MICROPHONES? WILL INSTASNAKE SUPPORT THOSE? 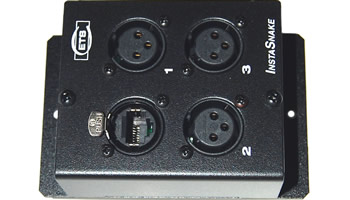 A third way to support phantom power is to use a new adaptor from ETS. The PA224F or PA224M "phantom enabler" plugs into an existing standard InstaSnake, one at each end. These adaptors do the same thing - sacrifice one of the four pairs to be used as a ground connection. Choose one of the four channels in your InstaSnake and plug in these adaptors. Make sure you have the same channel chosen at each end.

When you move from UTP (unshielded twisted pair) to any of the shielding or grounding alternatives mentioned above, you must be aware that you have established a ground and are therefore back in the world of "ground loops". It should also be noted that where a pair is sacrificed to become a ground connection, this does NOT mean that such a cable is SHIELDED. Only a cable with a shield is shielded. It might also be mentioned that where a shield is used as a ground connection, the resistance of that shield should be considered. A lower resistance or larger wire, increases the distance one can go to deliver phantom power. A skinny foil shield and drain wire can limit the distance, or the number of phantom powered microphones that can be reliably supported. 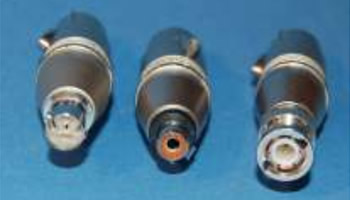 Note the InstaSnake was designed to work with balanced-line twisted pairs. However, there are many signals you might be forced to use that are unbalanced, such as video or consumer audio. ETS looked at this issue and introduced the PA220 and PV220 Series of adapter-baluns. These baluns are specifically designed to allow putting unbalanced signals into your balanced-line InstaSnake. There is a transformer in each balun... getting a high-quality transformer into an XLR is not trivial. These baluns can carry unbalanced analog audio (RCA), unbalanced analog video (RCA), professional analog video (BNC male or female), and even some digital audio balun adaptors (RCA - S/PDIF) PA882, PA883, PA886. 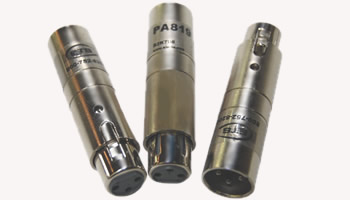 If you have balanced-line adapters but still experience noise problems, you might have poorly balanced equipment. Sometimes by unplugging the device from your InstaSnake, the noise disappears. In this case, It is likely your equipment is the cause of the problem. A solution might be to use an ETS "Re-Balancer" (PA819). The Re-Balancer uses a common-mode choke to 'repair' the balance in a balanced-line. The signal can go in or out at either end and it will support phantom power.