My name is Watson Wu, and my company and I specialize in creating original music, sound effects, and various sounds used for feature films, broadcast and cable television, and video games. When we were commissioned by Ubisoft to find, organize, and record sounds of authentic full-scale cannons for their flagship video game Assassin's Creed, we had to look for a more efficient way to lay out the numerous required microphone cables. We've looked at the traditional way of how rock concert venues laid out lengthy cables. If we went with using typical stage snakes, we would have had to budget more money and rent another large vehicle in order to transport all of our gear—not a viable solution. 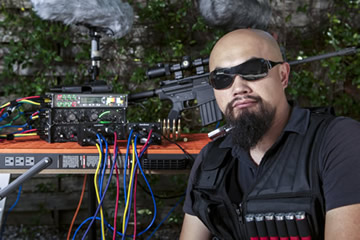 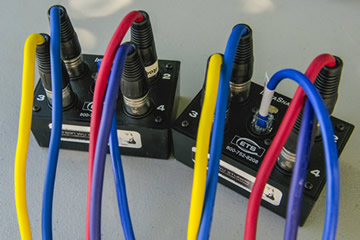 When I first heard about the InstaSnake™ technology, I was quite reluctant about trying out something so different. How can a really thin CAT5e network cable transmit 4 audio signals from a Box A to a Box B, and for up to several hundred feet, all without additional power? Since we started allocating a small budget per so many weeks to do something different, we decided to try out a pair of the boxes. Once the InstaSnake™ pair and a fifty-foot shielded CAT5e network cable arrived, we went out to the shooting range for an experiment. To do a fair test, two of the same microphones were positioned about 20 feet behind the shooter. The first microphone was connected directly into the Sound Devices 702 professional field recorder with a standard 100-foot XLR audio cable. The second microphone was connected with a 25-foot XLR cable to the InstaSnake™ Box A. Then a 50-foot CAT5e cable was used to join InstaSnake™ Box A to Box B. Finally, another 25-foot XLR cable was used to connect from the InstaSnake™ Box B to the recorder. During the recording, I sat with the Sound Devices 702 monitoring at about 100 feet behind the microphones. The closest firearm I was able to use to simulate blasts of full-scale cannons was a 50-caliber sniper rifle at a 1,000-yard shooting range. This particular round is quite large and extremely loud. After several shots were fired, the microphones were then re-positioned to capture more perspectives and distances, as this was going to be our task for Assassin's Creed. All the while during the recordings, I couldn't hear any difference between the microphone channels. Returning to the office, we did some playback and editing out loud on the large studio monitors. Still, we couldn't hear any differences between the two methods when comparing noise levels as well as for the quality of the recordings. This was a pleasant surprise, prompting us to order two more InstaSnake™ pairs and additional CAT5e cables for the cannons we were set to record.

The InstaSnake™ units just shone during the cannons session, and they also performed very well with many other projects since then. For Ghost in The Shell Online (Nexus/Neople, a South Korean game company), I was hired to record about 40 firearms, explosions, ricochets, impacts, and bullet flybys for seven straight very long days. We had over 20 recording channels among three linked Sound Devices recorders. The most difficult part was that we were required to capture the gun firing sounds up to 650 feet away from the shooter. Thus the distant gun firing sounds are actually just that—distant gun firing sounds, not some over-processed fake sound effects. I just can't imagine buying/renting and then transporting the large and heavy (and expensive) highly burdensome stage snakes to reach the great distances with the 20 recording channels required!

Both traditional stage snakes and InstaSnakes™ work. However, I would rather not spend more money or hurt my back carrying excessively long, heavy stage snakes to and from the multiple jobs we do. If I buy a 100-foot stage snake, I am stuck with a 100-foot snake. With InstaSnake™, I can cut or purchase any length of CAT5e cables needed to meet the demands of any job. I am certain our professional-quality InstaSnakes will last for many years to come. Thank you, ETS, for maximizing our recording capabilities by providing us with a dependable and versatile system designed to extend these cables, all of which are highly essential to our audio work. 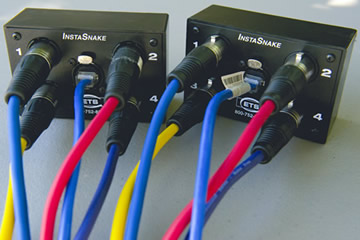 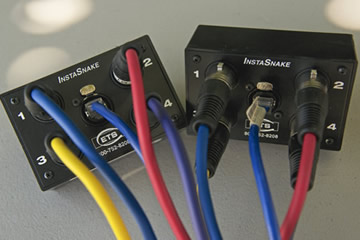