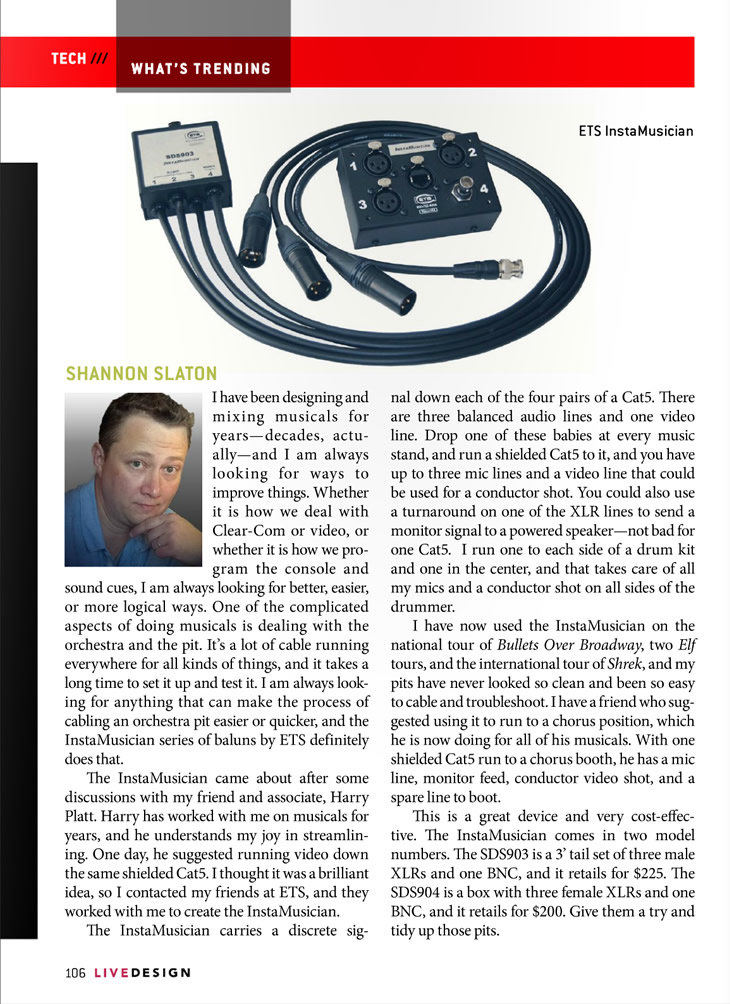 I have been designing and mixing musicals for years-decades, actually-and I am always looking for ways to improve things. Whether it is how we deal with Clear-Com or video, or whether it is how we program the console and sound cues, I am always looking for better, easier, or more logical ways. One of the complicated aspects of doing musicals is dealing with the orchestra and the pit. It's a lot of cable running everywhere for all kinds of things, and it takes a long time to set it up and test it. I am always looking for anything that can make the process of cabling an orchestra pit easier or quicker, and the InstaMusician series of baluns by ETS definitely does that.

The InstaMusician came about after some discussions with my friend and associate, Harry Platt. Harry has worked with me on musicals for years, and he understands my joy in streamlining. One day, he suggested running video down the same shielded Cat5. I thought it was a brilliant idea, so I contacted my friends at ETS, and they worked with me to create the InstaMusician.

The InstaMusician carries a discrete signal down each of the four pairs of a Cat5. There are three balanced audio lines and one video line. Drop one of these babies at every music stand, and run shielded Cat5 to it, and you have up to three mic lines, and a video line that could be used for a conductor shot. You could also use a turnaround on one of the XLR lines to send a monitor signal to a powered speaker- not bad for one Cat5. I run one to each side of a drum kit and one in the center, and that takes care of all my mics and a conductor shot on all side of the drummer.

I have now used the InstaMusician on the national tour of Bullets over Broadway two Elf tours, and the international tour of Shrek, and my pits have never looked so clean and been so easy to cable and troubleshoot. I have a friend who suggested using it to run a chorus position, which he is now doing for all of his musicals. With one shielded Cat5 run to a chorus booth, he has a mic line, monitor feed, conductor video shot, and a spare line to boot.