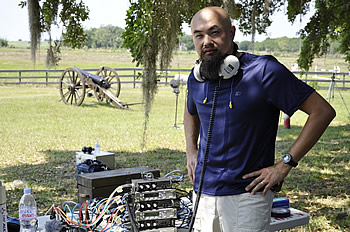 Meet Watson Wu of Boca Grande, Florida. His specialty is sound...not just any sound but sounds that are portrayed to the listener with complete accuracy. Not your orchestras, songs and speeches but everyday sounds from quiet to very loud. Eclectic and accurate are descriptive words that come to mind.

It is not often one follows their passion; meeting such an individual is quite another matter. One can imagine ...read more

In a remarkably short period of time, the Internet and associated technologies have changed our lives in amazingly fundamental ways, and you can literally observe that change at work. If you watch a movie produced just a few years ago, it’s astounding how quickly the social changes have taken place—and how glaringly those changes stand out. Movie characters don’t talk on pay phones any more, so a reliable plot device once used by writers is gone forever. It’s hard ...read more

The business of electronics is not only massive, but extremely quick to shift in response to market demand, or, as in the case of Apple’s Steve Jobs, a created demand. How? By designing and manufacturing a device or a product category (tablet computers) so attractive that the product itself creates demand, even among a buying audience who hadn’t known how much they really “wanted” it, or, even better, how much they ...read more

It’s amazing what you can find out by just walking around. A few months ago, I attended CineGear Expo 2014 held on the legendary Paramount Back Lot in West Hollywood.

It was, to be sure, a thrill to be walking among the massive soundstages and period faux street fronts where such legendary films as King Kong, Superman, The Godfather

Many are professional cyber thieves who seek financial gain by destroying or damaging their victims’ vital IT infrastructures. It’s an expensive headache that is as old as the Internet itself, so it’s important that all of us remain vigilant in our daily use of the vast data “bloodstream” that touches virtually every facet of our everyday lives.

It’s a sad fact that so much energy and so many corporate resources are taken up with safeguarding ...read more

New. We hear it all the time -- this product is "new," that service is "new," even this idea (say, a shiny tablet-sized slab of glass) is "new." We hear it so often we become immune to the meaning of the word. The very concept of "newness" is stretched thin in these times of cascading inventions; nearly every high tech company here in Silicon Valley can lay claim to a "new" idea.

And so we at ETS will carefully avoid any excessive reference to our "new" website, but nonetheless we're ...read more